Update on the Crescent Renovation Project 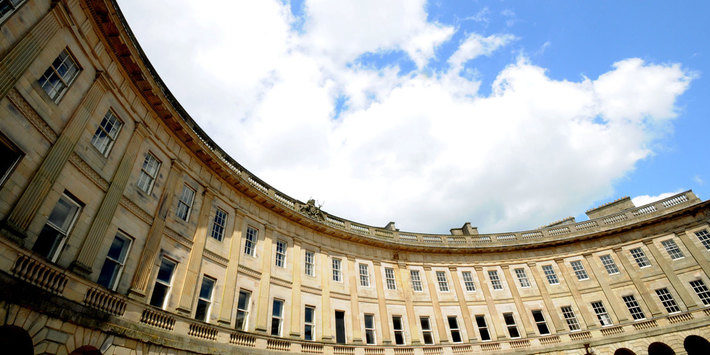 In early November, Jonathan Dawson, General Manager at Buxton Crescent Hotel & Thermal Spa, gave a presentation to our members at the Old Hall Hotel to update us on the renovation and plans moving forward. 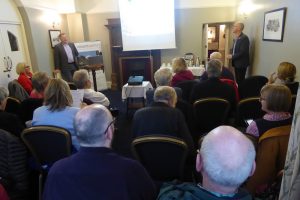 Jonathan began the presentation answering the question on most people’s lips –  “the Crescent will open when it is ready” (but definitely in 2020). Some parts are finished and carpets are being laid – the curved corridors are providing somewhat of a challenge!

There have been discussions over which period of decoration should be restored – original, Victorian, pre-war etc, and features not chosen have been recorded, preserved and covered.

At the front, there will be a new fountain, lots of external lighting (including uplighting and carriage lights made by Leander Architectural of Dove Holes) and six shop units. There will be three entrances at the front – a main one just to left of the centre, one for the Assembly Room and one for the visitor experience. Trade deliveries will be made via George St.

At the back, there will be no parking except for the use of an electric car charging point. There will be a bike shed (which will be painted grey) – the hotel is signed up for the Cycle to Work Scheme. The new, low walls are for a bin store (which will be lined by plants) and the courtyard terrace area for the restaurant (underwhich the kitchen extraction units are hidden). The outdoor pool above the restaurant is looking similar to the artist impression. The stone used for the new extension at the rear is the same stone as the main building so it should weather in to a similar colour.

Other insights gained to the hotel include:

The hotel operator, Danubius, is undergoing a structural change. The ‘Danubius’ name is being kept for the city hotels and ‘Ensana’ is being used for spa hotels. Click to see their website and promotional video. The company, Europe’s largest spa operator, was founded by Sir Bernard Schreier after WWII and his grandchildren now head up the company.

A Head of Sales & Marketing, HR Manager and Spa Director have been appointed. Other roles are being recruited from the local area, including from the Job Centre, with specialists coming from further afield.

Treatments available at the new spa include: traditional, diagnostics & therapy, bio balance, functional fitness, mindfulness & relaxation and mindfulness training plus UK spa treatments such as manicures and pedicures. The old Ladies’ Pool will become the only general pool with the others being used for individual treatments.

Facilities include: thermal pool, relaxation pool, outdoor pool, mineral bath, jet bath, sauna, steam room, salt cave (with salt coming from the Dead Sea), inhalation room and mud treatment (as apposed to the original peat). The mud is being imported from Hévíz in Hungary with a specialist mud kitchen being made in Germany.

There is also a spa café which may just be for the use of spa visitors. Derbyshire residents will be eligible for discounted treatments as per the Derbyshire County Council requirement in the development agreement. Ratepayers will be able to apply for a discount card.