Fringe40: the results are in 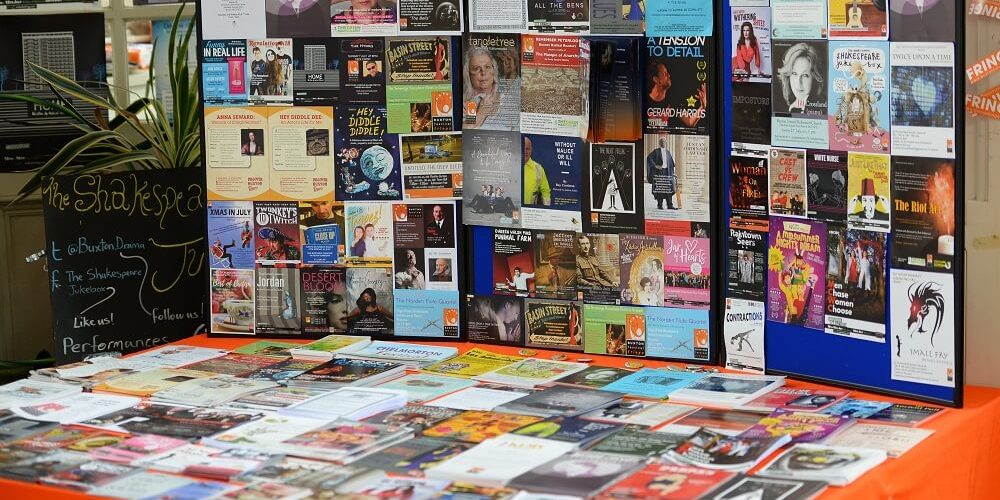 Buxton Fringe has revealed that this year’s bumper Fringe40 festival resulted in approximately 12,890 tickets being sold, a 43% increase on 2018. Meanwhile combined audience and performer spending resulted in a nearly £350,000 contribution to the local economy.

Fringe40 was the biggest ever Fringe with 220 separate events. The average per performance audience figure for ticketed events across the Fringe was 25 with many more at some performances. Fringe40 was also longer, with three extra days to mark the 40th year. Underground Venues reported that these days were “very well attended”. Meanwhile a big audience helped give a party atmosphere to PsychicBread’s music and poetry night at Buxton Working Men’s Club at the close of the Fringe. In the month of July the busy Fringe website received 867,302 total hits with the new Fringe App attracting another 2,664 hits.

The three managed venues had a particularly busy year, all enjoying significantly increased ticket sales. With good attendances at the 40 free events as well, the estimated total audience figure across the Fringe was a healthy 18,362, up 6% on last year.

Once again, the Fringe contributed hundreds of thousands of pounds to the local economy; this year’s estimated figure was £347,292 including expenditure from performers during their stay in Buxton plus audience spend on food, accommodation and ticket sales for shows from local performers. This very conservative estimate does not include the Fringe committee’s additional local expenditure on printing, design and Fringe Information Desk wages amongst other costs.

Results of the Fringe’s audience survey showed that 88% of respondents gave an approval rate of 4 or 5 out of 5. This satisfaction was reflected at the box-office with total ticket sales estimated at £93,969, 32% up on last year.

The Fringe is proving a big draw for Buxton with visitors coming from all over the UK and beyond. There were entrants from as far afield as Moscow and over a third of the artists who responded to the Fringe’s entrants’ survey were also attending other festivals including Edinburgh, Brighton and Sydney, Australia.

Audience feedback was overwhelmingly supportive with comments including: “The Fringe fills Buxton with vibrancy. It makes Buxton an exciting place to live in July. There is always something on.”, “Buxton does not know what it has got. The quality and variety of performers and performance is much underestimated”, “40th Fringe best one yet”, “The town comes alive when the festival plus Fringe are on. I love it!”, “Amazed every year by the quality and variety of the programme” and “The Fringe makes Buxton buzz.”

Meanwhile on the entrants’ survey form, performers praised the Fringe entry process with comments such as: “Very good communication with participants”, “It is well worked out – the guidance is clear, entry process is straightforward and quick responses over any problems”, “Nice and simple. My favourite fringe festival” and “Everyone is friendly and helpful; a lovely atmosphere which creates a platform to encourage you to do your best.”

Outgoing Fringe chair, Keith Savage, comments: “This summer was great for Buxton. Both the Fringe and the International Festival celebrated anniversaries and saw increases in ticket sales. It is good to see the risks taken by performers and producers pay off.”

The Fringe committee plans to build on audience and entrants’ suggestions for the future and thanks everyone who filled in its surveys.

Next year’s Fringe is already being planned. Dates have been set as July 1-19 2020 with the Fringe website www.buxtonfringe.org.uk opening for entries on December 1 and a discounted entry fee (price to be confirmed) available until the end of February. Could you design the programme cover? The Fringe has a reputation for spectacular covers with the Fringe40 cover featuring an intricate lion design by Catherine Webb entitled Roar Talent.

As in previous years the contest is open to amateur and professional artists of all ages with the design to be featured on tens of thousands of Fringe programmes as well as being publicised on the Fringe website, the Fringe flyer, on badges, in advertising and in the press. There is a £100 prize for the winner! The work of runners up will also be featured on the website and potentially in other publicity materials.

The Fringe is leaving the choice of subject matter up to the entrants, the more imaginative the better. Full details are available on www.buxtonfringe.org.uk. Acting Fringe chair Stephen Walker comments: “Fringe is all about creativity and new ideas, and in Buxton that starts from the beginning with our programme cover. We’re excited to see what the talented artists in Buxton and beyond can come up with for our 2020 programme.”

The closing date for the competition is November 1st 2019.

Join Buxton Fringe at the Green Man Gallery on Saturday 7th December for their annual party celebrating the opening for entries for next year’s festival. 7pm-10pm.