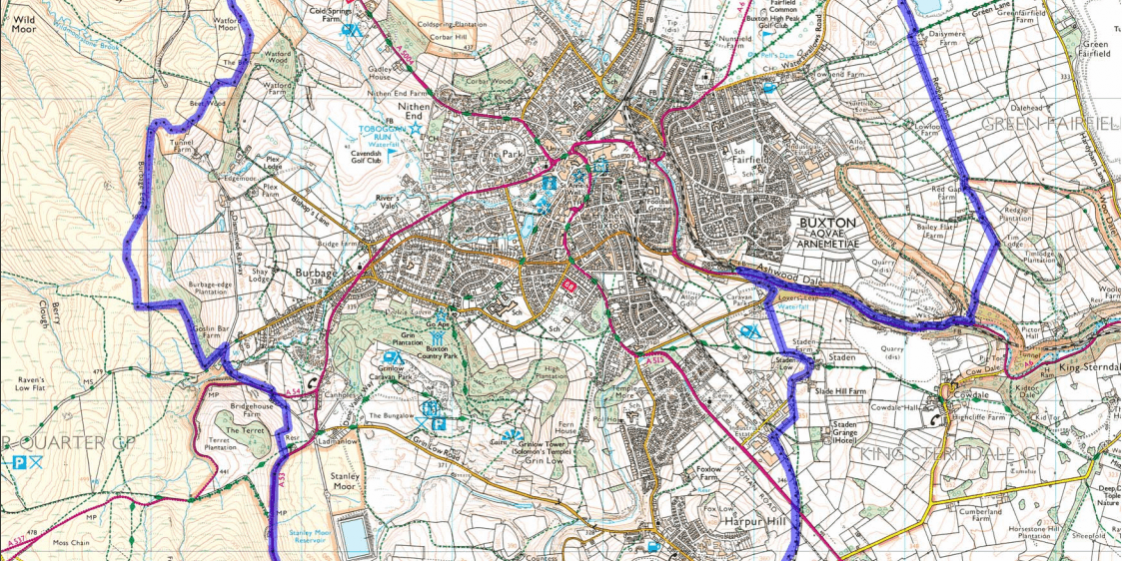 Residents group ‘Buxton Neighbourhood Forum Community Interest Company (CIC)’ has applied to High Peak Borough Council to designate a neighbourhood area and neighbourhood forum for Buxton under sections 61F and 61G of the Town and Country Planning Act 1990. The application is now out for public consultation.

NDPs give members of a community a voice in determining the future development of the area in which they live enabling them to shape local planning policy. An NDP is a formal planning document which sits within the Local Plan and has the same force in planning decisions. This means it is taken into account when planning applications are being considered.

The High Peak’s Local Plan was adopted on 14 April 2016 and sets out the council’s vision and strategy for the borough until 2031 including the scale and location of growth, particularly focussing on housing. Find out more about the Local Plan on the HPBC website here.

Producing an NDP is a Community Right as introduced by the Localism Act 2011. Over 2000 communities have since produced and adopted NDPs. They can add detail and local decision-making to the Local Plan. For example, they could decide where and what types of development not detailed in the Local Plan should happen, designate green or biodiverse spaces, set design, construction and environmental standards and propose developments not in the Local Plan. However, NDPs cannot overturn previously approved planning applications or be contrary to the strategic aims and policies of the Local Plan.

NDPs can only be made by volunteers from the local community and only submitted by a body representing the local community. They are usually brought forward by qualifying bodies such as town or parish councils. Buxton has neither of these so the Buxton Neighbourhood Forum CIC has been created to do so. Read more about the CIC below.

Buxton Neighbourhood Forum CIC applied in September 2020 to become the designated qualifying body to prepare a Neighbourhood Plan for the area. Application documents are available to view on the HPBC website page here.

The proposed area to be covered by the NDP is available to view here.

It encompasses the whole of Buxton reaching north along the A6 to halfway to Dove Holes, to Waterswallows and Green Fairfield to the east, all of Harpur Hill and part of the Harpur Hill Business Park to the south and all of Burbage and Ladmanlow to the west. It covers the wards of Barms, Burbage, Buxton Central, Corbar, Cote Heath, Limestone Peak, Stone Bench and Temple.

The public consultation runs from 26 November for six weeks.

Comments on the area map and application of the Forum to become the designated body to prepare the NDP should be received by 5pm on Tuesday 12 January 2021.

They can be submitted through the Council’s online consultation website here.

Alternatively, you can download a comments form [86KB] and either complete electronically and email it to neighbourhoodplanning@highpeak.gov.uk or print and post it to Planning Policy, High Peak Borough Council, Town Hall, Buxton, High Peak SK17 6EL.

Buxton is unusual in not being parished, i.e. it does not have its own town council. This means all decisions about Buxton, including planning matters, are decided at by High Peak Borough Council. Planning is always sensitive and often decisions are made by officers following national guidance such as the National Planning Policy Framework (NPPF) and the Local Plan.

The creation of a neighbourhood forum was a project of the Buxton Town Team which involved a series of public meetings as well as discussions with other community organisation, such as Buxton Civic Association, Transition Buxton, Vision Buxton, Churches Together, and residents’ associations. The outcome of these meetings was a decision to set up a CIC to take forward the creation of an NDP for Buxton and be the qualifying body in place of a town council. It has no power and only one objective, to produce the NDP.

The CIC was incorporated in June 2019. See its records here.

The Forum organised a series of public meetings in central Buxton, Fairfield, Harpur Hill and Burbage to explain the reasons for creating n NDP, discuss the possible content of the plan and recruit members. To be a qualifying body requires at least 21 members which represent the community. The Forum has 38 members with a ~60 year age range who live in all Buxton wards and a third of whom work in the town with a range of occupations.

See the application documents on the Buxton Neighbourhood Planning page on the HPBC website here.

A Facebook group for the Forum was set-up in August 2019. Join it here.